As part of the Up Close and Personal series, Irvine and Lunny revisited their legendary album, speaking with Hot Press’ Pat Carty about their lives and careers leading up to – and beyond – the creation of Planxty. 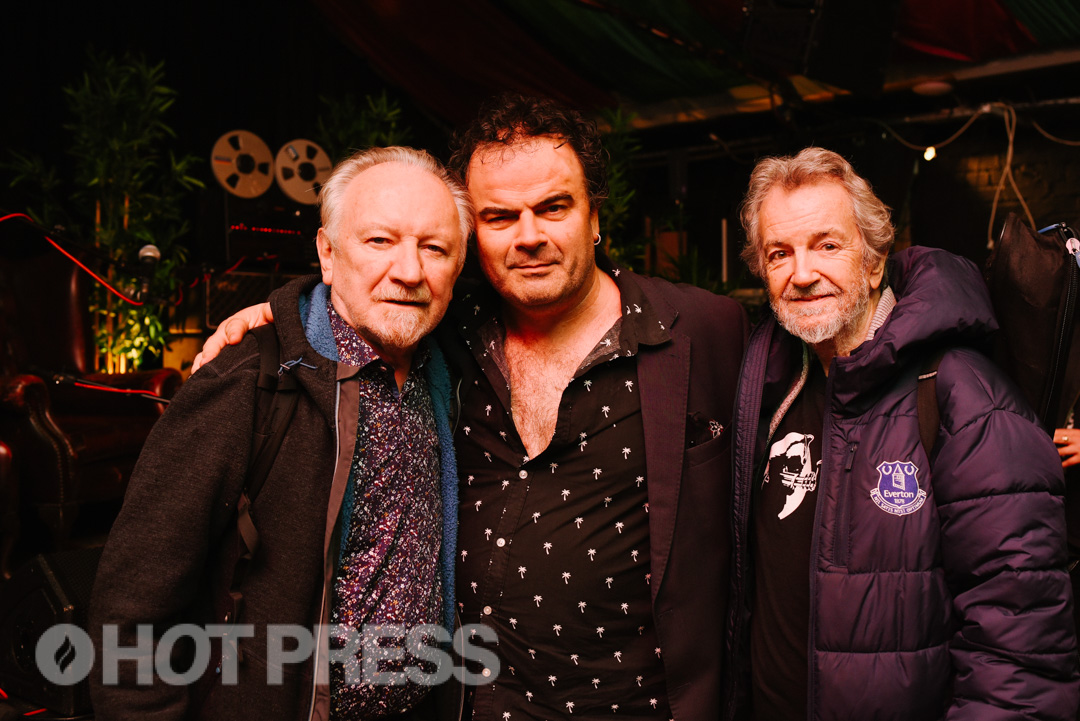 Produced by Phil Coulter, who had a bit of a laissez-faire approach since the Planxty musicians had a clear-cut vision for their eponymous album, Planxty was a revolutionary album, sparking a wave of excitement in the Irish folk and trad community. As described by Carty, the work of Irvine and Lunny – and their Planxty cohorts – represented a “seismic shift” in the Irish folk idiom, due to their innovative mixing of ballads and tunes. For the musicians, however, the process was an organic one, driven by a love and passion for the music itself.

“I’m not sure that any of us really understood the success we acquired,” said Irvine. “It’s what we did.”

Throughout the night, Carty guided the musicians through their careers, talking about how they got to where they are now. For Lunny, he discovered music alongside fellow Irish folk icon (and Planxty man) Christy Moore. During sessions at Pat Downing’s, he found a like-minded community – and a new obsession.

“That’s really where I developed a passion for traditional music,” said Lunny about his times at Pat Downing’s.

Elsewhere, Irvine was an actor in London, where he was born and had spent much of his childhood.

“I was a child actor, and I was very good,” he admitted with a laugh. “I say that without conceit because all child actors are good.”

When he finally moved to Dublin, he said that he “found the niche in life [he] was looking for.”

After listening to the album’s opening track, ‘Raggle Taggle Gypsy’, Irvine and Lunny began their first live performance, ‘Arthur McBride’. From their seats on stage, the two men exuded a commanding presence and showcased their powerful musicianship. The song – by now an Irish folk standard – which expresses an anti-war sentiment, was greeted by huge applause from the crowd. 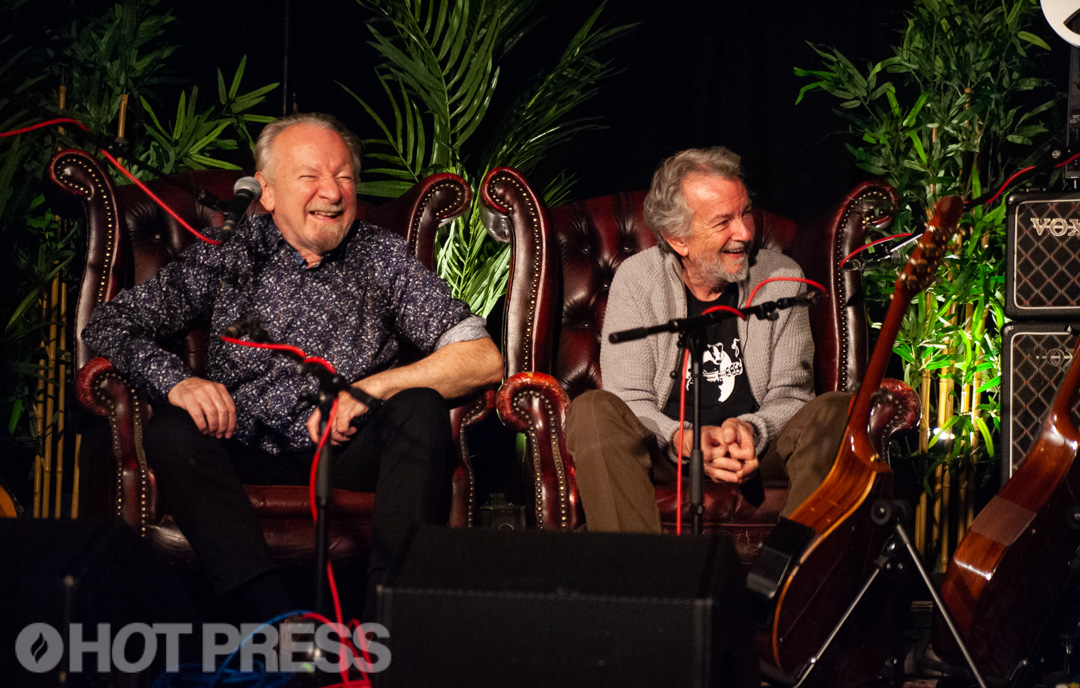 In between listens to ‘Planxty Irwin’, ‘Sweet Thames Flow Softly’ and ‘Junior Crehan’s Favourite – Corney Is Coming’, the musicians discussed their times on the road, the introduction of the bouzouki into Irish music, and where the name ‘Planxty’ came from – though it seems that both Irvine and Lunny were unsure of the origin of the latter word.

“It could have derived from the word ‘sláinte’,” Lunny started to explain. “You grow into the name, and the name becomes novel.”

‘The West Coast of Clare’ was the second track performed live, featuring delicate and precise backing on the musicians’ instruments. With the audience hanging on every note, the song’s deep emotions could be felt throughout the venue.

This was followed by the recorded versions of ‘The Jolly Beggar – Reel’, ‘Only Our Rivers’ and ‘Sí Bheag, Sí Mhór.’

Though Planxty’s ‘Follow Me Up To Carlow’ and ‘Merrily Kissed The Quaker’ went unplayed for time reasons – there was so much great conversation, the night flew! – the duo finished the evening with a performance of ‘The Blacksmith’. The Eastern European-influenced track is unique in its time signature and quirks, highlighting Irvine and Lunny’s incredible musicianship. Fingers were flying on both bouzouki and mandolin, the music filled with a passion that clearly hasn’t diminished since the original release of the album in 1973.

The final song was greeted by a standing ovation from a raucous crowd, who were whooping, hollering and cheering for the legendary musicians, capping off another excellent night of the Up Close and Personal series at The Grand Social. 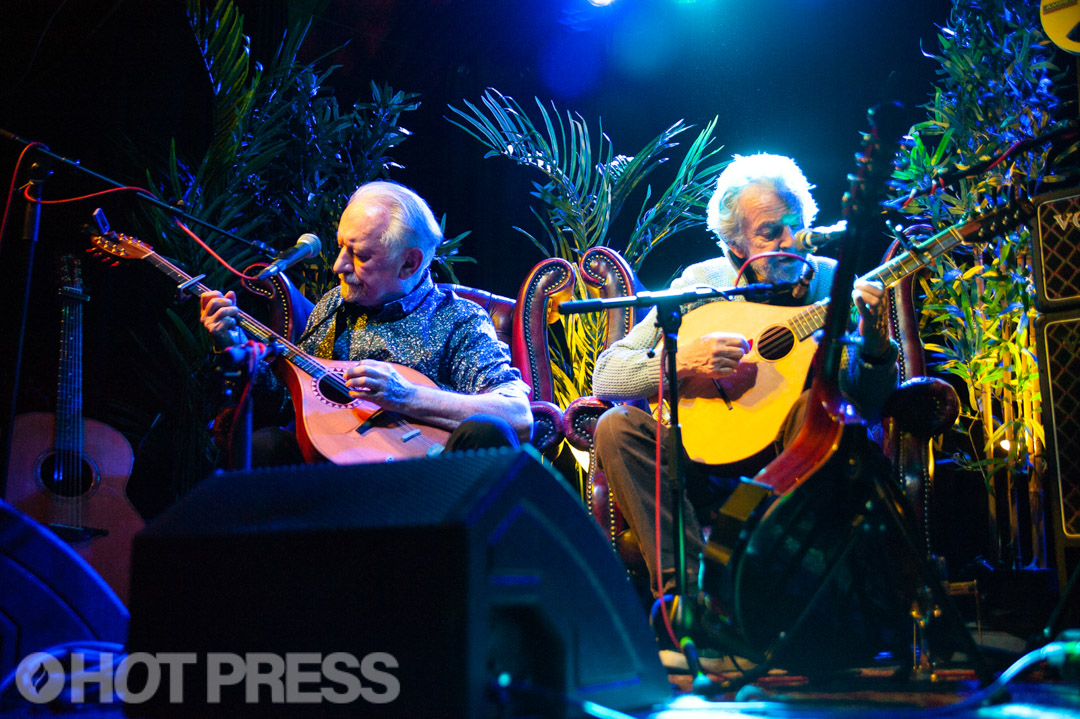 read the full interview over on hotpress.com

On foot of the success of Old Dog Long Road – volume 1, we now bring you
volume 2!

On foot of the success of Old Dog Long Road – volume 1, we now bring you
volume 2!

ODLR2 is available now from www.andyirvine.com, stay tuned for part 2 of this feature.

On foot of the success of my retrospective collection “Old Dog Long Road” volume 1(AK-8), we now bring you volume 2!

These recordings represent a record of my long career of playing music and for that reason I can’t resist adding in one or two tracks that go back to the very beginning when I would return from my day job, take up my Gibson L-00 guitar, put my newly half-learned harmonica in the rack that Ramblin’ Jack Elliott had given me, turn on the big tape recorder that my mother had bought for me and record a song or two that had been going through my head all that day.

Most of the tracks on this double CD are my own solo performances, gigs and home recordings, but there are some songs and tunes, recorded with other musicians and previously unreleased. The Greek song, “The Snows” with Mozaik (Andy, Dónal Lunny, Bruce Molsky, Rens van der Zalm and Nikola Parov) featuring Chrysoula Kechagioglou is a track we recorded, but left out of Mozaik’s latest album “The Long And The Short Of It” (MOZCD03). “Sweet Bann Water” – a traditional song learned from the singing of Joe Holmes and Len Graham – I recorded in ‘the wild’ in South Australia with Rens van der Zalm for our album “Parachilna” (AK-4) in 2012. The traditional songs and tunes I recorded include “Jack Mulroe”(2008), “The Royal Forester”(1978), a different version of “A Blacksmith Courted Me”(1970), a hornpipe “The Drunken Sailor”(1984) and jigs “The Contentment Is Wealth/The Shores Of Lough Gowna”(1984), and an early song of my own, “You Fascists Bound To Lose”(1968).

I have great memories of playing with Nollaig Casey and Des Moore and I’ve included the hornpipes, “Cooley’s/O’Dwyer’s”(1983) from the one tour we did. There is a live Planxty track with Johnny Moynihan, Paul Brady and the late much lamented Liam O’Flynn on “As I Roved Out”(1975) and “The Blind Harper” with Dónal Lunny at Tailor’s Hall in the Liberties of old Dublin in 1978.

Considering the age of some of these ‘performances’, the sound quality is remarkable. The example of an “oldie” on this collection is “Hobo’s Lullaby”(1961), recorded nearly sixty years ago.

I’d like to offer my great thanks to Leon O’Neill, a master and a perfectionist in getting the very best sound out of old slightly faded recordings! And thanks sincerely to all the venues, sound engineers and audiences, all over the world, who have contributed to this release.