I interviewed Andy Irvine at Don Quixote’s in Felton on June 20th, 2010. Andy plays bouzouki, mandolin, and harmonica and sings in Patrick Street, Mozaik, and also solos. Andy is wonderfully unassuming, so full of experience and knowledge, and a joy to talk with. 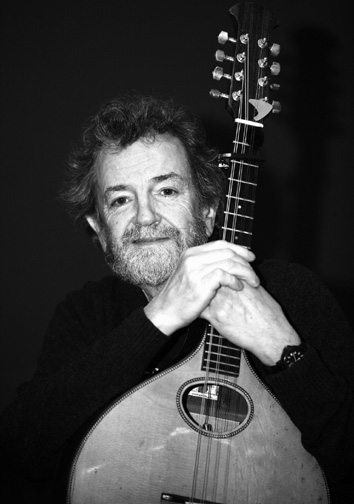 I’ve been reading your recollections on your web site. What’s up with your book?

Well, it’s very forward in my consciousness. I do intend to do it, but I keep finding that there are things that have to be cleared away before I have a clear field. You know, I kept a diary from 1961 through 1963. I’ve been transcribing that. It’s got to be in the computer before I start. If you live long enough you have a story to tell.

There’s a fair amount on your web site about your mandolin and bouzouki. What about your harmonica?

The thing about harmonica is you can’t see what you’re doing, so it’s hard to describe. Teaching people to play harmonica, I’d be lost. If you’ve a whole range of diatonic harmonicas, the actual note you’re playing you wouldn’t be aware of. There’s a lot of feel to it.

So what harmonicas do you use?

Well, I generally use Hohner diatonic harmonicas, but I would have a lot of them tuned in what they call the Country Tuning, which means that the reed in 2nd position is sharpened, so it’s played in major scale. I discovered this guy in England called Anthony Dannecker, who used to work for Hohner. He makes up harmonicas out of Hohner components, and he became the guy that I use to tune my harmonicas. I also play an old Hohner Meister Class harmonica.

What drew you to the type of music you play?

It was a progression. The friends that I had when I was in my early teens – when 45’s came out; great music; early rhythm and blues, like Fats Domino; in the mid-Fifties — and they went, “Wow! Hey! This is fantastic!” And I thought, “Yeah, it’s OK, but it’s not what I’m looking for.” And then this fellow, Lonnie Donegan, appeared, singing kind of Leadbelly and Woody Guthrie songs. That was when I discovered the music I was interested in, and it was all American — “It Takes a Worried Man” and “Midnight Special” and all that kind of stuff. Then I discovered Woody Guthrie through Lonnie Donegan, because Woody Guthrie is mentioned on the back of one of his records. I was hooked on Woody. So then I got into an old Harry Smith anthology, old ’78s from the 1920s.

Then I belatedly discovered my own folk music. It was common in that day. We all started back in the late Fifties and early Sixties into American music, and then people like Ewan McColl said, “Yes, yes, yes, but there is a lot of good stuff here.” So eventually we all got into ours here.

Celtic Society of the Monterey Bay © 2016

Andy Irvine was born in 1942 and he started recording for his own enjoyment back in 1960 when
his mother bought him a heavy reel-to-reel tape recorder. ere are some very rare tracks from his
early days even before he became a professional musician and there are recordings of his busking
days in Germany by himself or with Johnny Moynihan. In the early 70s he made some demos for
Planxty in Dublin , one of them from this album, was never recorded. ere are a lot of recordings
from gigs that Andy has played over the last 50 years, mainly solo but some with his musical friends,
Dónal Lunny, Kevin Burke, Jackie Daly, Frankie Gavin, Rens van der Zalm and Gerry O’Berne, to
name but a few. Above all, this double album shows Andy’s remarkable ability to play highly complex
accompaniments at the same time as performing vocals of quality.

This is the first volume of recordings I made since 1961. They are not in any way intended as my latest albums and indeed, are issued as a limited edition, meant mainly for the ardent fan! The recordings are not always of studio quality in spite of the masterful sound manipulation of my dear friend the late Tim Martin who did a marvellous job of making even the most dubious old recording listenable. Many thanks to Leon O’Neill who also improved some difficult tracks.

I started recording for my own enjoyment back in 1960 when my mother bought me a heavy reel-to-reel tape recorder. Later I recorded songs so that I wouldn’t forget them and could go back and re-learn them. There are also many recordings made at gigs I have played around the world in the last 40 years. I would like to make special mention and give special thanks to Ray Barron of Cork who recorded so many of my shows in The Lobby Bar in Cork in the 90’s.

The bulk of these recordings are solo but there are some with great musicians I have played with over the years. Many thanks to Dónal Lunny, Rens van der Zalm, Johnny Moynihan, Frankie Gavin, Rick Epping, Kevin Burke, Jackie Daly and Gerry O’Beirne, all of whom appear on this first volume.
Thanks also to Jeremy Kearney for letting me use the Foxrock Folk Club recordings. More from that club in that period, with singers like Ronnie Drew and Luke Kelly, are available on “Live at Foxrock Folk Club – The Parish Hall Tapes 1970-72” (Cornelscourt Records CR 001).
If this album is well received, there will be a clatter more!!

This video was captured from VHS or Beta Recording Tape, and uploaded straight to You Tube, if for any reason this video contravenes any copyright, or you have any issues with this being broadcast, please contact me and I’m happy to assist you with any issues.
Please enjoy!