Tickets to see Andy Irvine and friends cost €45 (including booking fee), and will go on general sale this Thursday, March 17th at 10am.

Andy Irvine will mark his 80th birthday with a show at Vicar Street Dublin on Monday, June 20th this year.

Multi-instrumentalist and trad/folk singer-songwriter Andy Irvine has maintained his highly individual performing skills throughout his over 50-year career.

Having been been hailed as “a tradition in himself”, Andy has been at the helm of legendary bands like Sweeney’s Men in the mid 60s, to the enormous success of Planxty in the 70s. Irvine and Lunny recently revisited their self-titled debut album for the Hot Press Up Close and Personal series.

Following Planxty, Irvine joined fellow trad outfits Patrick Street, Mozaik, LAPD and recently Usher’s Island. Andy has been a world music pioneer and an icon for traditional music and musicians in his time.

As a soloist, the performer fills the role of the archetypal troubadour with a show and a travelling lifestyle that reflect his lifelong influence, Woody Guthrie. His repertoire consists of Irish traditional songs, dexterous Balkan dance tunes and a compelling canon of his own self-penned songs.

During the various Covid-19 lockdowns in Ireland, the folk legend finally managed to compile the material together for his own Woody Guthrie album and recorded the results.

“I’d been planning to do a Woody Guthrie album for four years now, care to remember,” he told Hot Press late last year, smiling. “I got it together and I recorded everything, and now it awaits other people’s inputs. He’s my first and main influence. I’ll have to relearn all this material I’ve recorded, but I’m looking forward to it.”

“I’ve booked Vicar Street in June to celebrate my 80th birthday, because 10 years ago I played two gigs there for my 70th birthday with a couple of bands,” Irvine added. “Sweeney’s Man, Mosaik, and LAPD with Paddy Glackin and Liam O’Flynn. That gig was a great success. We put it together on a CD and on a DVD, and I don’t see why I shouldn’t do it again for my 80th. Then I’d be looking forward to my 90th!”

Tickets €45 (including booking fee) on general sale Thursday 17th March at 10am.

Running times will be announced on the day of the show

Usher’s Island sees the coming together of five of the most acclaimed and influential names in Irish Traditional music.

Andy Irvine and Donal Lunny, both members of Planxty, Paddy Glackin, a founding member of The Bothy Band, the ubiquitous Michael McGoldrick, formerly of Lunasa and Capercaillie, and John Doyle who has played with many of the greatest names in Irish music, including Solas, Liz Carroll, Eileen Ivers & Mary Black, not to mention driving the rhythm section of the hugely popular Transatlantic Sessions.

Each member of Usher’s Island is a talented soloist in their own right, but in this new band they offer a blend of old and young and of vocal and instrumental talents that results in exceptional music and dynamic live performances.

Presented by The Queen’s Hall

Read more about folk shows at The Queen’s Hall and our guide to traditional music in Edinburgh here.

Although he has been inspiring musicians for over half a century, Andy Irvine finds it difficult to place himself where others do, in the upper reaches of the pantheon of Irish musical culture. Ironic, then, that he should have just recorded an album called Precious Heroes 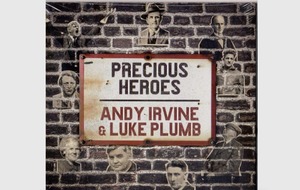 THE last time I interviewed Andy Irvine was face to face in the Radisson Blu nine years ago when he had just moved with this Japanese wife, Kumiko to Fermanagh.

Before we started, he ordered a sandwich and went to the loo but it took him half an hour to get back as people were stopping him and thanking him for giving them a lifetime of musical pleasure.

When he finally sat down, he looked at his now-curled up sandwich with sadness at first, then with the stoicism of a man who has spent most of his adult life on the road.

And Andy finds it very hard to place himself where others do, in the upper reaches of the pantheon of Irish musical culture, someone who has been inspiring others for over half a century.

“A lot of people say that. I never quite got to the bottom of it myself,” he says, almost embarrassed by the praise.

“It’s so often told that one has been an inspiration and it’s really nice to know that, but it’s really hard to understand – I don’t know how to say it really.”

One person who has definitely been inspired by Andy is Luke Plumb, a mandolin player from Tasmania who spent 11 years playing with Shooglenifty and he and Andy have just recorded an album called Precious Heroes.

“There used to be this festival in New Mexico and he used to attend and I’d been there once, and he’d teach musicians how to be Planxty. I thought that was quite charming and slightly mad! He didn’t come in on the ground floor, as it were,” says Andy.

Precious Heroes is all about the unsung ordinary men and women who have done great things in life but who have never gained the recognition of the masses.

Luke Plumb and Andy IrvineWhat is Andy’s definition of a hero and how did the album come together, I ask.

“The people I sing about are all heroes in their own way, from Ballymoney singer Joe Holmes to truck drivers, to Nixie Boran, communist and leader of the Castlecomer miners. Most people have the hero within them somewhere,” he says.

On the album, Andy sings about Frank Ryan and his fight against fascism; political commentator Fintan O’Toole and others believe Trump has begun a trial run on fascism in the USA. Would Andy agree that are we living in dangerous times?

“Yes, I would agree,” he affirms. “I read [O’Toole’s] article myself and it was a real eye-opener in a lot of ways. One certainly had the impression that the world is moving so far right that is it moving into a dangerously fascistic state.

“They way O’Toole underlines the trial runs, as he called it, the fact that you can do something terrible, like the separation of children at the Mexican border – that you can make people feel that this is OK. That is Hitler-like.

“Six or nine months ago I thought this is not going to last. I thought people were surely going to move towards people like Sanders and Corbyn – people would move towards ‘sane’ politicians, but it’s not happening at the moment.

“The situation in Australia is unbelievable. They’re trying to build AUS$5billion worth of coal-powered power stations. The world has gone mad.”

Andy also admits to having got himself into trouble with other musicians for ‘harassing’ them about not going to Israel.

“All of that is quite sad because there are a lot of good people in Israel that one would like to play music for but you have to take a standpoint,” he says.

Planxty, reunited for a concert in Belfast’s Waterfront Hall in 2005, with Andy Irvine second left Picture: Niall Carson“It’s frustrating that the world-famous musicians and singers don’t do a bit more. If Bob Dylan or somebody of his ilk – not that Bob would do it – but Bruce Springsteen, I’ve always felt, could write a great song that would just say ‘F*** it!’ but he’s never quite done that. If he stood for president, which he surely wouldn’t want to be, he’d surely get in. Because that’s the way American people are, they’ve already voted in B-film actor Ronald Reagan.

“However, I always had high hopes for Roger Waters from Pink Floyd and Frances Black – now there’s a hero for you.”

Next up for Andy – no, he never stops working – is an album of Woody Guthrie songs, a project he has been thinking about for as long as he can remember. Recording starts this month. But then Andy comes up with a real surprise.

“In September I’ll also be working with jazz double-bassist Lindsey Horner from New York who played on my album Way Out Yonder. He’s a great musician and a nice guy. He has this idea that we get together and record a ‘jazz-ish’ album of songs that I would have heard my mother sing.

“I’m always going on that my mother didn’t know a whole song from a hole in the ground but she did know a lot of great 30s and 40s standards. I’ve had this idea for quite a long time and was appalled when Dylan jumped the gun and preceded me!

“I haven’t listened to his and I’m not going to, but I really look forward to singing the likes of These Foolish Things. My mother met Jack Strachey, the composer, and I met him once. I don’t know how that will go with my fans but hopefully it will be great music.”

Andy and Kumiko have left Fermanagh for Wexford since we last chatted.

“I decided that at my advanced age it would be better to live in a place that I owned so we bought a house outside Gorey. I miss Fermanagh, I have to say, but where we are now is nice and it’s ours,” he says in a sentence that says a lot about the uneven rewards of being a folk singer, no matter how revered.

Mr Irvine will also be going quite a few live gigs later this year with possibly a gig in Colum Sands’ Rostrevor Folk Club on October 29.

“Then we have four gigs with Dónal Lunny, Paul Brady, Kevin Burke and myself in October,” he says. “There’s also a Liam Ó Floinn tribute concert on 28 October and I’m hoping Ushers Island will be one of the bands playing there.”