Maighread and Tríona Ní Dhomhnaill
Sisters Maighread and Tríona Ní Dhomhanill belong to a celebrated family of singers hailing from the Donegal Gaeltacht. The unique style and repertoire has been handed down to them through generations of the Ó Dhomhnaill family. Added to this is their distinctive unison and harmonic interpretations of Donegal songs and their fluent and accompanient. Together with their late brother Mícheál, a fine singer and instrumental player, they formed the seminal traditional group, Skara Brae in the late 1960’s. It was through this group and its one recording, now a classic, that the regional songs of their native Donegal were introduced to a wide audience both in Ireland and abroad. Their live performances have been described as ‘unforgettable beautiful and heart-rending’. Prepare to be transported by their appearance at TradFest.

Andy Irvine and Donal Lunny
Two giants of the Irish trad scene, Andy Irvine and Donal Lunny are uniting for an evening of great music, a mixture of traditional songs and originals composed by Andy. Between them, Irvine and Lunny have been at the helm of legendary bands like Sweeney’s Men, Planxty, The Bothy Band, Mozaik, LAPD and recently Usher’s Island. Their unique style of accompanishment is an ongoing influence in the wider world of Irish music. The two, in their seperate ways, have contributed to a veritable renaissance in Irish traditional music. Lunny and Irvine will present a programme of Irish music and Andy’s songs with a bit of Eastern European music. Don’t miss this unique opportunity to see these two legens of Irish music on stage together on as part of TradFest.

As if reuniting with Planxty wasn’t enough, Andy Irvine continues with Mozaik, another musical project combining Eastern European sounds with Irish and American vibes. Úna Mullally spoke to him about the music.

‘Live From The Powerhouse’ is the new record. How do you feel about it?

I love it! I think it’s great. We were in Australia, coming towards the end of a tour and we had the foresight to rent recording equipment and record it.

The Eastern European influence – does that stem from your time in those parts in the 60s?

The Eastern European side definitely does but as well, that old-time American sound has always been a huge influence for me, and I think that comes across strongly too.

People have been predicting the death of trad for years, but it hasn’t exactly come about yet, has it?

No, not at all. There are an awful lot of bands out there keeping it going, and more. The state of Irish traditional music has never been healthier. People like Kíla spring to mind.

Of course, the big news was Planxty reforming. How did it happen?

We’d been meeting for about five years, just having dinner together and discussing old times. I think somebody just posed the question of reforming and everybody was into it. We all lept at it really. We went on meeting and recording and sometimes it seemed it would happen and sometimes it didn’t. I think the catalyst was Leagues O’Toole’s No Disco programme on us. We realised that if we didn’t get back to Planxty now, we’d all be dead in a while and never able to make that choice.

Were you disappointed when No Disco ended?

It was terrible. And RTE never explained it. I don’t know why they did it. Mr. RTE obviously has a mind of his own. They’re not doing what the people want. I just didn’t understand that decision at all.

Were you nervous about playing together after all those years?

It did occur to me that we’d get up and play it and it wouldn’t work. I thought people could’ve raised us in their memories and then be disappointed with what we actually played. But that absolutely didn’t happen. The music seemed so fresh again. 100% of the people I’ve talked to about the shows in Vicar Street were blown away by it. But, y’know, there’s no full-time about Planxty. We continue one step at a time. I suppose the CD and DVD were a last step but then we are doing 12 concerts next December and January.

There are no plans to record. We are going to get together for a meeting on the 1st of February and we’ll see what happens.

It starts on July 18th and goes on to August 3rd. We start at the Erragail Arts festival, then Galway and so on, and it finishes at a show in West Belfast.

How do you feel about being labelled way up there as a ‘legend’ when it comes to trad?

It doesn’t bother me. If people want to call me that…well, I don’t know if I’m flattered by it. It doesn’t sway me. It’s kind of silly, really. Surely you can’t be a legend in your own lifetime?

Mozaik, with support from Dirty 3, play The Village, on Dublin’s Wexford Street, as part of the Bud Rising Festival on Tuesday 27th July. Doors 8pm, tickets €20. 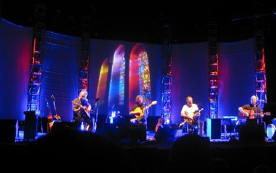 Review Snapshot:
A reunion concert sceptic is blown away by Ireland’s trad supergroup.

Short of The Smiths burying the hatchet anywhere other than firmly in between their respective shoulder blades, I generally don’t approve of bands reforming and screwing their fans one last time to top up their pensions. More often than not, what ensues is a sub-standard offering – take the recent shambolic Pogues Christmas karaoke. To put it mildly, I am underwhelmed at the prospect of catching Planxty, the privilege of which is costing me 65 euro (including the outrageous Ticketmaster charges?deep breaths, deep breaths). Still I have promised an exiled friend home for the holidays, so it is off to the Point with me.

As a general rule, I have a fondness for all genres of music, but as with jazz and blues, I usually enjoy trad for about fifteen minutes before I grow weary. As Planxty take to the stage, the crowd of a couple of thousand is attentive to the Point of being able to hear a pin drop – a complete atmosphere bypass, so all of the omens for an enjoyable night are bad. And then the music starts. The first thing of note is that the sound is absolute perfection, probably the best I’ve heard at a gig; precisely balanced, particularly in ensuring that Liam O’Flynn’s pipes do not drown out the delicate string playing. Christy Moore takes us through instant crowd pleasers of ‘The Good Ship Kangaroo’ and ‘Little Musgrave’ with Donal Lunney and Andy Irvine’s intricate mandolin and bouzouki complimenting each other beautifully. O’Flynn chips in with some excellent pipe and tin whistle and Christy is at his understated best, clearly relishing not being the centre of attention.

The first real show stopper of the night is O’Flynn’s rendition of the ‘Dark and Slender Boy’, an air that showcases the power and depth of harmonies a master player can extract from the pipes. As the songs roll on, you can only sit there and appreciate that you are listening to four musicians who if anything have only got better as time has passed. The fragility the years have brought to Irvine’s voice only adds to the charm. The tunes are timeless and their execution exemplary.

At the close, the Planxty standards of ‘The West Coast of Clare’ and ‘Raggle Taggle Gypsy Rose’ bring the house down – two hours have passed in the blink of an eye. It has been thoroughly captivating. The encore includes Andy Irvine’s recently penned ‘O’Donoghues’ a reminiscence on their heyday when you couldn’t get arrested for playing this sort of music. I can only take it all back. Planxty have been worth every penny. They are masters of their craft and who could begrudge them their day in the sun having each spent thirty years championing this music.

You know, it would be easy to consider Planxty a little naff. They play a mix of folk and trad, sing songs about the ‘West Coast Of Clare’ with lyrics that mention shillelaighs and were entertaining your parents before many of you were even born. But Planxty are much more than just a sentimental relic of the past…

You know, it would be easy to consider Planxty a little naff. They play a mix of folk and trad, sing songs about the ‘West Coast Of Clare’ with lyrics that mention shillelaighs and were entertaining your parents before many of you were even born.

But Planxty are much more than just a sentimental relic of the past, and it was perhaps the fact that it was No Disco’s premier indie boffin Leagues O’Toole who made the docu which lead to their reunion that made many in the younger generation sit up and take notice. Last year’s triumphant run of sold-out Planxty reunion shows in Vicar St. earned such a reception that the trad supergroup were bound to do an encore, which materialised recently in the shape of yet another run of packed concerts.

This time The Point was the venue for the veteran folk collective to weave their spell, and when Christy Moore prompts the assembled throng by describing how the crowd on the group’s first reunion night sang along to every word of ‘Cliffs Of Doneen’, the audience responds accordingly, providing perhaps the most spine-tingling moment of the evening.

This is about as far away from souvenir shop Irish muzak as it is possible to get. You go to a Planxty gig and not only do you get a whole world of balladry and songs opened to you, it comes with a compelling history lesson as well. Some groups pillage the ’60s for inspiration. These guys at times go back to the 1760s, but breath life into the songs by the vigour with which they play them.

And when Christy relates the background to one song, when the four of them were in a pub and heard “songs we’d never heard before, and time stood still for a few hours”, you know exactly what he’s talking about.