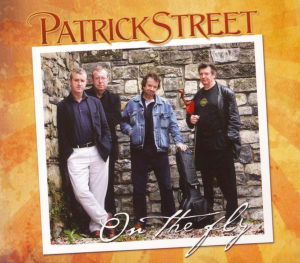 A recent review of this album in the UK magazine Songlines referred to Patrick Street as a ‘Dublin band’, revealing not only the reviewer’s ignorance about a group which has never featured a Dublin-born member in its career of now twenty years and more, but a sheer lack of understanding of the derivation of the musical elements which have coloured this group’s recordings and performances since its inception.

On the Fly is the band’s first album since 2003’s Street Life, the first to feature John Carty (on fiddle, flute and banjo – though he’s been performing live with the band for several years now) and the last to include accordionist Jackie Daly, who only appears on two tracks. Indeed, following Jackie’s departure, Patrick Street must be the only Irish ‘supergroup’ whose members were all born in England (three in London and guitarist Ged Foley in Durham)! A ‘Dublin band’, Songlines?

This latest album very much follows the standard Patrick Street format. There’s a wide mix of various dance tunes (three sets of reels, including wonderful interplay between Kevin and John on Down the Broom/The Gatehouse Maid/Mulvihill’s, plus hornpipes, jigs and slip jigs, as well as a set of polkas with Jackie Daly’s box to the fore) and John’s own composition the air/jig Seanamhac Tube Station. Indeed there can have been no more joyous sound on a recent recording than the sheer swing and sway of the twin fiddles on Martin Wynne’s.

Andy digs deep into his repertoire for three songs: The Rich Irish Lady, learnt from a Peggy Seeger LP in the late 1950s; plus Erin Go Bragh, first heard in a Hull pub in 1964; and, Sergeant Small, a depression song gleaned from his many visits to Australian. As has become a matter of course, but really needs reiteration, there are few singers in the English-speaking world able to tap so fundamentally into the wellsprings of a song than Andy and these three song outings tremendously reinforce that fact. Additionally, there’s a rare outing for Ged’s vocal cords on an engrossing version of The Galway Shawl.

Lastly, those two concluding tracks with Jackie Daly provide a gorgeous reminder of the accordionist’s ability to spur a tune ever onwards into the deepest regions of the imagination and provide some of the slickest ‘tips’ you’ll ever hear in your life.

Ever enthralling, On the Fly is an essential purchase.

‘On the fly’ usually denotes hurriedness, a quick-fix in a situation where time is limited. However, this On the Fly does not betray anything of moves made in-flight or constrained by time. On this, the eighth studio…

‘On the fly’ usually denotes hurriedness, a quick-fix in a situation where time is limited. However, this On the Fly does not betray anything of moves made in-flight or constrained by time. On this, the eighth studio album from Patrick Street, the music is measured out in a space which flows around, above and in-between the 47 minutes it takes to play through the twelve tracks.

More than being just another release, this album represents an important shift in the line-up of Patrick Street as it formally marks the departure of Jackie Daly. But in effect, Daly already recorded his last Patrick Street album with Street life (2002), featuring on just two tracks, quite appropriately.

As a replacement, John Carty adds a new dimension to the group’s sound. His fiddle, flute and banjo playing create interesting settings, counterparts and leads to Kevin Burke’s flowing bow.  In the tune selections Carty and Burke explore their shared musical background. While on well-roved paths – such as ‘Happy to meet Sorry to Part’, ‘Martin Wynne’s’ and ‘Down the Broom’ – their twin fiddles create a raw, direct sound that is often unnecessarily smoothed over in contemporary traditional recordings.

On the song front, Ged Foley makes a brave attempt at resuscitating the worn out ‘Galway Shawl’; it took a while, but it grew on me. As usual, Andy Irvine is reassuring in the regular consistency of his sound world. ‘The Rich Irish Lady’ is a fine example of his inventiveness with contrapuntal accompaniment. Indeed, on each of the four songs there is an interplay which makes full use of the four musicians.

Overall, the production creates a live feel. The studio is absent in that you only ever hear four musicians, albeit in an ideally balanced setting: it is a document of things as they are rather than a fiction created in the studio or on stage. Within Patrick Street is the present place of Irish traditional music as it is in the flesh; this music could happen in your house.

I don’t limit my enjoyment of the album to one track, but there is certainly one that stands out for me: the set of hornpipes, ‘The Long Acre/Cuz Tehans’. This is as good as it gets, temperately measured with notes falling into each other like dominoes, moving to form a design mapped out by the four individuals.Banjo and fiddle moving together forces a smile, but words only catch the sentiment on the fly: go and listen for yourself.

PLANXTY: ONE NIGHT IN BREMEN

Planxty – One Night in Bremen

This hour-long live album treat, recorded on 24th April 1979 at Bremen University (Germany) by Radio Bremen, captures the “original Planxty” lineup (i.e. Andy Irvine, Christy Moore, Liam O’Flynn & Dónal Lunny), reunited (effectively “re-created”) for a monster (58-date) spring-1979 tour (in other words, pre-dating – by just a week! – studio sessions for the After The Break album, for which much of the material performed on the tour – eight out of the twelve selections on this live set, in fact – was re-recorded). The foursome was augmented on this tour by the Bothy Band’s master flautist Matt Molloy (he was to join The Chieftains shortly after recording After The Break). If the set encapsulated here is anything to go by, it was a stunning tour, and there’s no escaping the chemistry of a great band in full flight at the top of their game, where the music’s so good you just don’t want it ever to end.

Every track’s a winner. Vocal highlights include Christy’s take on The Pursuit Of Farmer Michael Hayes (a storming choice for opening number!), Andy’s magnificently delicate account of You Rambling Boys Of Pleasure, and an ably harmonised Bonny Light Horseman. Returning to the days of the eponymous second Planxty album, Andy revisits Raggle Taggle Gypsy (complete with its lilting Tabhair Dom Do Lámh playout), while Christy brings to this stage the Barney Rush song Nancy Spain from his own repertoire (and 1976 solo record), which receives a deft new small-scale band arrangement.

The various instrumental sets come off brilliantly too, with plenty of individual spotlight moments and tight, vigorous and generous ensemble work at all times. Two of the tune-sets (the East Of Glendart double-jig medley and the Blackberry Blossom reel-set finale) were to crop up again on After The Break, as was the by-then-customary (but still crowd-pleasingly welcome!) tricky (9/16)- metred Balkan dance tune (the Bulgarian Smeceno Horo). The two remaining instrumental items, however – the First Slip set of slip-jigs and The Humours Of Carrigaholt reel-medley – are (as far as I can tell) unique to the set-list for this tour. But none of them can fail to get the feet tapping, and the lively sense of true craic runs through these performances for sure.

As to the recording of this concert, I feel that (aside from a slight trace of distance in some of the vocal entries), it gets well inside the intimacy of the performance, as well as the difficult band dynamic. It helps to remind us of the acuteness of interplay between these expert musicians – enabling us to marvel again at features such as Liam’s stirring uilleann pipes work, the jaw-dropping intricacies of the Irvine/Lunny bouzouki and mandolin working in consort, the eagerly driven rhythmic verve of the bodhrán behind the pipes, as well as many other felicitous and naturally managed details of balance.

One small point: although the running order of the items on this disc is for the most part perfectly credible and contrasts are preserved, it’s not clear whether the correct actual sequence of the concert has been reproduced. The audience’s presence (and healthy appreciation) are heard after each item but fairly quickly faded out (there must’ve been plenty of between-song banter), so it’s hard to tell. But the fire and fury and commitment of Planxty as a hell of a performing unit is there in full force. Live sets are by their nature usually best aimed at the converted, but for someone outside of the established Planxty fan-base One Night In Bremen certainly steers closer into the “worth acquiring” category than the majority of live releases.

Planxty need little introduction but for those who aren’t aware of this force in Irish music, it comprises of quartet Andy Irvine, Donal Lunny, Christy Moore and Liam O’Flynn. On this album they are joined by Flautist Matt Molloy who would later become a key figure in the massive and ever-enduring Chieftains. When they arrived in the early 70s with flares, taking their rogue-ish hippy attire and performing blistering Irish folk, they certainly turned a few heads and cemented their names into the scene.

The album here is from a time in the late 70s, where the band had reformed and had refined their sound. The album is a live recording from April 1979 in Bremen, Germany before the album recording ‘After the Break’.

The album opens on ‘The Pursuit of Farmer Michael Hayes’, a stomping song sung by the often imitated but never replicated singer Christy Moore. He’s in fine form on this album. Liam O’Flynn’s pipes open the second track with his evocative and expressive style of playing, this is part of what makes Planxty such a force in Irish music. Combine that with the Mandolin/Bouzouki combination of Irvine and Lunny, they step away from ‘Trad’ and become their own.

What is a delight from listening to these live recordings is hearing a band in full flow. With both Irvine and Moore who are solo performers in their own right, albums like this will be ‘must-haves’ for those who follow these two performers.

Andy Irvine leads the plaintive ‘ You Rambling Boys of Pleasure’, this is a standout track on the album. Irvine’s classic delicate vocal which sounds like he’s singing just for you is evident on this track, rather like Irvine’s many poignant Planxty ballads.

‘Smeceno Horo’ is a driving Balkan tune led by Mandolin and Bouzouki, then Molloy’s flute. This would be Matt Molloy’s only tour with Planxty before joining The Chieftains.

The classic ‘Raggle Taggle Gypsy / Tabhair Dom Do Lamh is the only song from their renowned first album on here. Delivered very well by Moore. One of the early parts in the track you can hear someone in the audience shush other clapping members. It’s nice to hear this is a live album with enough audience noise in there so it doesn’t become another live album that is just tracks performed differently.

I have to say, what does let this album down is the artwork, which resembles a poor bootleg which has had little care in fonts or their size and also leans a little too much to ‘Oirish’ with its garishly green artwork. This is by no means an album for someone to acquaint themselves with Planxty, rather for those who wish to re-acquaint themselves with this era of Planxty or to keep their collection up to speed. Which if you are, and can get past the artwork, there are some fine songs on this live album.