Where It All Began

At this time of resurgence of interest and activity in folk music, with many young singers and bands carving out new identities within the genre, how fitting it is to hear a new collection from one of the true originators and provocateurs of the 1960s folk revival, the evergreen singer Andy Irvine. This double CD set comprises mainly solo live and demo recordings, spanning more than fifty years of music making. Some of the demos are home recordings made in preparation for more complex studio versions with other musicians; these are something akin to the artist’s sketchbook, and in a sense are more unmediated, intimate representations of Irvine’s art. The album and recording still arguably endures as the essential artistic statement of musicians in most genres, and any access to these embryonic stages in the creative process is welcome. The live tracks chart Irvine’s career as a performer, and include songs from the folk clubs of the 1970s, more recent material from the Lobby Bar in Cork, and recordings from his many tours abroad.

There is a certain homage here to one of Irvine’s oft-cited germinal influences, the American folk singer Woody Guthrie, in the imagery of the road; the sense of devotion to music and to the life of the folk singer; a cover photo that foregrounds Irvine as a live performer, and the prominence of the harmonica within that image. And indeed spread across the album are a set of songs that mine this heritage (songs of labour being a core part of this repertoire) and hark back to Irvine’s early experiences as a guitarist in skiffle, blues and American folk. These include the earliest recording here, ‘Truckin’ Little Baby’ (1961), a ragtime blues song learnt from Blind Boy Fuller, and Irvine’s youthful singing and guitar picking works hard at emulating the original. This was around the inception of the blues revival in Britain, but Irvine never swayed from the path broken by Guthrie, as attested to by the cover of Guthrie’s harmonica piece ‘Lost Train Blues’ (1971), and his song ‘Seamen Three’ (1981), with its characteristically political lines: ‘Shipped out to beat the fascists, Across the land and sea.’ Indeed Irvine has long championed the cause of the worker and others involved in struggles against the establishment, as also evidenced in the opening song, Si Kahn’s ‘Goodbye Monday Blues’, which documents the hardships endured by cotton mill workers in North Carolina. 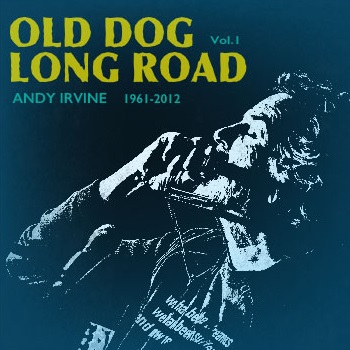 Close detail
But Irvine’s work has also been more than about just ‘singing the news’, and a second group of songs show off his skill in reinterpreting folksongs. A number of these have been imaginatively recreated from printed sources: the ill-fated ‘Lady Leroy’ comes from a 1910 folk music journal, and the ‘Kilgrain Hare’ and others come from the pages of the Sam Henry Collection. Others were learnt from some of the main sources for the singers of the folk revival period: ‘Sweet Lisbweenmore’ was sung by Cork singer Elizabeth Cronin; ‘Edward Connors’ is an emigration song from the repertoire of Eddie Butcher from Derry; and Leitrim singer Thomas Moran was the source for the unusual ‘Captain Thunderbolt’. Irvine also includes a number of his own compositions here, of which the most intriguing is the early ‘Dublin Lady’, written to a poem by American poet Patrick Carroll.

One of the great benefits of this set is that it mostly focuses on Irvine as a solo performer, allowing us to hear in close detail just how impressive a musician he is, both as an instrumentalist and as an interpreter of traditional songs. Listen to how Irvine’s mandolin weaves magical lines around the melody of ‘Captain Colston’, sometimes echoing the voice, sometimes punctuating the melody with horo-esque cross-rhythms, and always colouring and shaping the harmonies in unexpected ways. On the more sonorous ‘Green Grows the Laurel’, Irvine’s vocals take on a darker patina, allowing the bass bouzouki to enrich and intensify the duskier sound. Those enamoured of Irvine’s work with other musicians, and in particular the interlacing bouzouki and mandolin lines pioneered by him and Dónal Lunny, will revel in his acerbic composition ‘King Bore and the Sandman’.

Given the long period this retrospective covers, the sound quality understandably varies throughout, but this never distracts from the quality of the songs collected here. And while the historian in me was longing for a chronological ordering, the approach of mixing up the tracks does provide more contrast when listening through the two CDs. It’s a worthy document of Irvine’s prowess as a live performer, and invaluable for the light it throws on his less familiar material, and on the development of his sound and music across a long career. Perhaps best of all, it is encouragingly labelled as ‘Volume 1’, whetting the appetite for another journey down the long road.

Andy Irvine: Old Dog Long Road, Volume 1: 1961-2012 is available from www.andyirvine.com. Irvine will play the Purty Kitchen in Dún Laoghaire on 6 December and the Flowerfield Arts Centre in Portstewart on 7 Dec. In January and February he tours New Zealand, and next March he will perform a number of dates with Paul Brady in Ireland. For full details, visit www.andyirvine.com/gigs.

Adrian Scahill is a lecturer in traditional music at Maynooth University.