Andy Irvine is one of the great Irish singers, his voice one of a handful of truly great ones that gets to the very soul of Ireland. He has been hailed as “a tradition in himself.” Musician, singer and songwriter, Andy has maintained his highly individual performing skills throughout his over 50-year career. From Sweeney’s Men in the mid 60’s, to the enormous success of Planxty in the 70’s, his duo with Paul Brady in the later 70s and then from Patrick Street to Mozaik, LAPD and Usher’s Island, Andy has been a world music pioneer and an icon for traditional music and musicians.

As a soloist, Andy fills the role of the archetypal troubadour with a show and a travelling lifestyle that reflect his lifelong influence, Woody Guthrie. To quote The Irish Times, “Often copied, never equalled”, his repertoire consists of Irish traditional songs, dexterous Balkan dances and a compelling canon of his own self-penned songs.

He returns to New Zealand for a full tour, including a very welcome return to the Auckland Folk Festival, exactly twenty years since his last visit to the festival. His tour sees him visit iconic venues, The Bunker and the Mussel Inn, and ends with an appearance at the New Edinburgh Folk Club in Dunedin.

Don’t miss a legend in intimate venues all over Aotearoa. 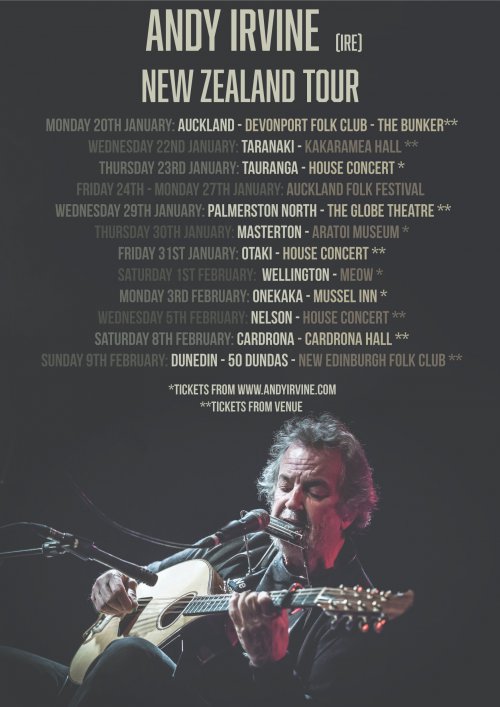