Here’s a nice piece written by Leagues O’Toole author of the must read “The Humours of Planxty” book. 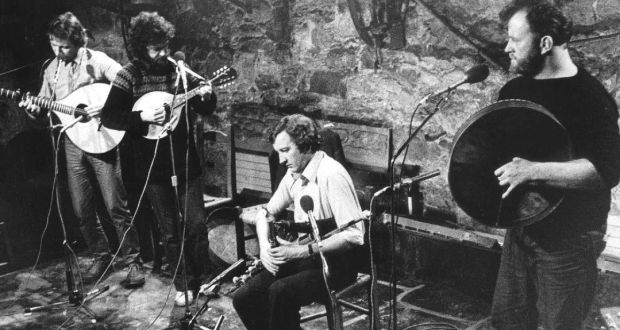 Liam O’Flynn’s abilities first came to prominence as a member of the cutting-edge trad-folk band Planxty.

There has been a sad sense of anticipation leading up to the passing of Liam O’Flynn, or Liam Óg Ó Floinn as he was often referred to, amongst those who knew of his illness.

O’Flynn was no ordinary musician. There was something deeply significant about his work with the ground-breaking group Planxty, his remarkable solo recordings, his collaboration with late poet laureate Seamus Heaney, and other landmark projects such as The Brendan Voyage with composer Shaun Davey in 1980. It’s also no coincidence that O’Flynn graced the recordings of some of the music world’s deepest thinkers such as Kate Bush, Emmy-Lou Harris and Enya.

O’Flynn was the foremost living exponent of that most mystical instrument, the uilleann pipes. He didn’t so much play the pipes as search them for the deeply resonant rapture and reflection that they brought to Irish music. Seamus Heaney perhaps said it best himself in the sleeve-notes of O’Flynn’s incredible 1995 solo album The Given Note: “There has always been a classical quality about Liam O’Flynn’s playing, a level, confident strength: you feel that he is unshakably part of a tradition. But there is something up and away about his style, a sheer delight in his own personal impulse. His great stature as a piper turns out to be one more instance of the truth of Oscar Wilde’s paradoxical law that in art the opposite is also true: in other words, behind these tunes you can hear freedom as well as discipline, elegy as well as elation, a longing for solitude as well as a love of the seisiun.”

Liam O’Flynn’s abilities first came to prominence as a member of the cutting-edge trad-folk band Planxty, put together by Christy Moore and also featuring Dónal Lunny and Andy Irvine. His piping and tin-whistle playing were central to the band’s exhilarating opening period in the early 1970s, beginning with Moore’s Prosperous album and the game-changing Planxty debut “the Black Album”. A regular feature of the Planxty performance was when the other musicians put down their instruments as O’Flynn performed a solo air or “aisling”, which always brought the venue to a meditative standstill followed by an emotional eruption of applause.

O’Flynn was universally considered a kind, thoughtful and private man. He lived in Kildare, where he felt a deep affinity with the land and a shared love of horses with his wife Jane, a well-known showjumper.

The Kildare-born musician began his journey with the uilleann pipes under the tutelage of the great Leo Rowsome, and quickly became a star apprentice winning numerous prizes at Oireachtas and Fleadh Ceoil competitions. He later developed under the guidance and influence of two giants of piping, Willie Clancy and Seamus Ennis. Through these influences O’Flynn developed an important understanding of the role he played within the tradition and lineage of Irish music culture. As he said himself: “Seamus Ennis gave me much more than a bag of notes.” And O’Flynn, as Master Uileann Piper of Ireland, never compromised this position once, leaving a perfect legacy for generations of younger musicians within this “living tradition” to learn from.
source: www.irishtimes.com