A special Easter Sunday programme looking at Ireland in 1917 – a year on from the Rising, with historian Gearóid Ó Tuathaigh; playwright Philip Orr; and poet Dermot Bolger. 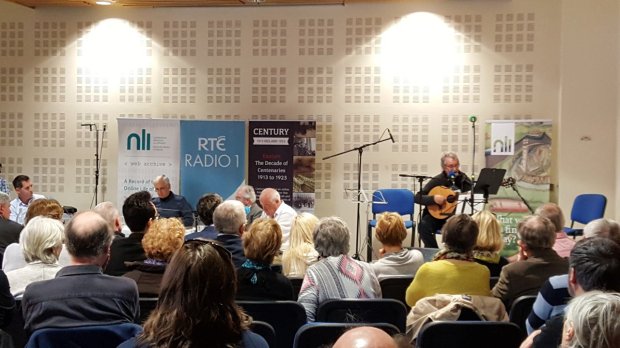 A year on from the Easter Rising

In the programme, we look at life in Ireland in 1917 – a year on from the Easter Rising.  Myles is joined by Galway historian, Gearóid Ó Tuathaigh; Belfast playwright Philip Orr; by Katherine McSharry from the National Library; and Mark Duncan from Century Ireland.  There’s also music from Andy Irvine and Kate O’Callaghan; a poetry reading by actor, Barry McGovern; and a reflection by writer, Dermot Bolger.

Bringing the past to life! Discover how our world was shaped as Myles Dungan and guests explore events ranging from medieval times to the recent past.

We want to help explain ourselves to ourselves. We will search out fresh angles on familiar topics, seek out the unfamiliar and will not shy away from bizarre or controversial issues. Our ultimate goal is to make The History Show the primary port of call for those with an intense or even a modest interest in the subject. We want to entice the casual and the curious to join us in celebrating the past.

Our aim is to create informative, reflective, stimulating and above all, entertaining radio.

Join us on Sundays from 6.05pm for The History Show with Myles Dungan on RTÉ Radio 1.

THAT’S THE STUFF TO GIVE ‘EM

I’m always fond of company; I’m always fond of noise
And never so delighted as when with the Khaki boys
To try and make our Tommies smile of songs I’ve sung a few
It’s grand to hear them on the march and don’t they sing ’em too.

They do say half a dozen women round a pot of tea
Will talk for hours and hours of things they never see
But if you’d like to hear the spicy stories they can spin
Just place that same old half a dozen round a drop of gin.

When nice and cosy in your bed you can’t say it’s a treat
When wifey dabs into your back a pair of icy feet
And when the twins begin to cry then off will go the clothes
For safety pins and dummies, well you bet that Mother knows.

You often hear a fellow say he’s tired of married life
Well, that’s because he knows not how to treat his darling wife
But I’ve invented something that will please each little dear
It isn’t much but I can guarantee what I’ve got here.