Johnny Moynihan plays The Cove Bar on Wednesday the 24th of February.

Johnny Moynihan  is a folk singer based in Dublin, Ireland. He is often credited with introducing the bouzouki into Irish music in the mid-1960s.

Known as “The Bard of Dalymount”, he was a co-founder of the band Sweeney’s Men with Andy Irvine and ‘Galway Joe’ Dolan (who was later replaced by Terry Woods). Sweeney’s Men broke the mould of Irish music and are credited with starting the folk revival there in the late 1960s.

In 1973, Moynihan briefly joined Planxty for their album Cold Blow and the Rainy Night. After Planxty, Moynihan replaced Irvine in De Dannan in 1976 and can be heard on their second album, Selected Jigs, Reels & Songs, released in 1977 but never re-issued on CD.  Also in 1976, he recorded with Maddy Prior & June Tabor (the Silly Sisters) and with Tony Hall.

In 2006, Moynihan could also often be seen playing old-time Appalachian music with a trio based in east-Clare and calling themselves ‘Frankie, Johnny and Sweetheart’ (a pun on the song title Frankie and Johnny). The other members were Swedish Lena Ullmann on clawhammer banjo and American Frank Hall on fiddle; in 2007, they renamed themselves Moonshine.

Johnny plays The Cove Bar Attic Sessions on the Dunmore Road Wednesday the 24th with special guestsThe Carty Sisters.  Tickets are available from The Cove Bar or by ringing 087-9028 153 Tickets are €15 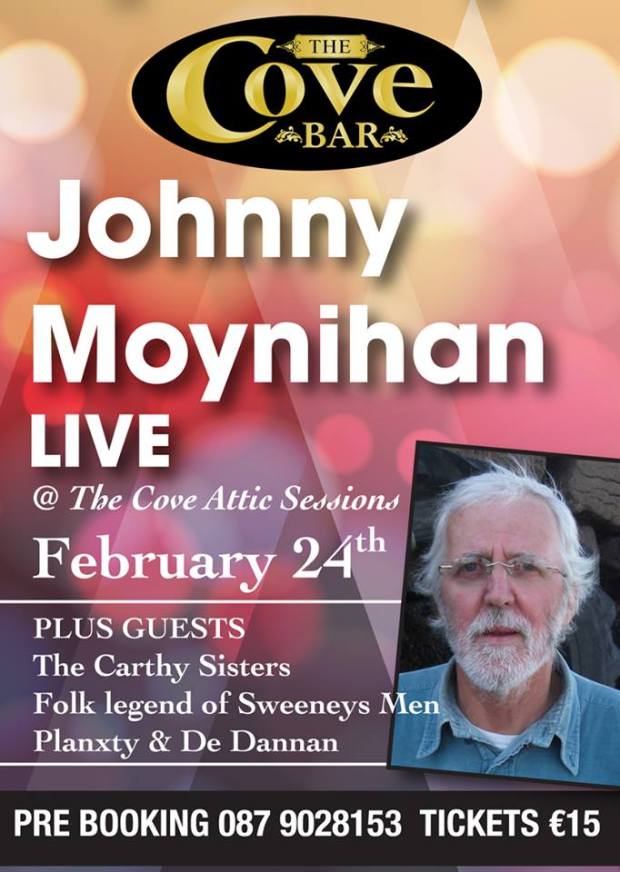